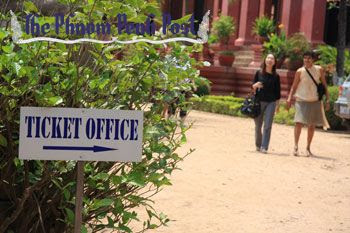 Tourism Ministry and industry groups attempt to boost visitor numbers during the holiday by slashing prices
Photo by: SOVANN PHILONG
Foreign tourists outside the National Museum in Phnom Penh.
THE Cambodian Hotel Association (CHA) and the Cambodia Association of Travel Agents (CATA) will cooperate with the Ministry of Tourism to give special discounts to domestic and international tourists during the coming Khmer New Year, officials said Wednesday.
The effort comes as tourism authorities adopt a more hands-on strategy to promote the sector in the face of declining arrivals and stiff competition from other countries in the region that have offered incentives to boost arrivals.
"Tourists will receive discounts. If they spend two days in a hotel, they will get an extra day free or other discounts from ... hotels, restaurants and guesthouses," said CHA President Luu Meng, adding that the discounted rates had been posted on the association's website to attract tourists.
The strategy, which kicked off at the beginning of April, is part of an attempt to boost domestic and foreign tourist numbers
during the financial downturn. "While the crisis lasts we will try to keep the number of tourists fixed, but I hope that domestic tourists will increase by around 10 percent this year," Luu Meng said.
CATA President An Kim Eang said one of the main aims was to broaden the scope of Cambodian tourism by promoting local culture during the New Year in addition to the well-trodden destination of Angkor Wat. "I can't say the campaign will increase the number of tourists. We just want to promote our traditions to foreign tourists in addition to Angkor Wat," he said.
Se Cheng, sales executive of Prince d'Angkor Hotel and Spa in Siem Reap, said occupancy rates had declined by 15 and 20 percent in 2009 because most customers were from Western countries that have been hit by the financial crisis. He said the shortfall had prompted the hotel to offer "special promotions" during the New Year that include lower rates for visitors staying more than two days and food and drink discounts.

Luu Meng said the scheme is being adopted by most CHA member hotels, but he was not sure if other establishments were offering similar deals.
"Members of my association always offer discounts during the New Year, but I can't say whether other hotels will take this chance to increase prices," he said.
Tourism Ministry officials said that they are pushing for more regional and domestic tourists to offset the decline in visitors from Europe and North America.
"We are trying to attract tourists from countries in the region, like Vietnam and Laos, that are also big tourist destinations, and we are urging local tourists to spend their money in their own country," said Minister of Tourism Thong Khon.
An Kim Eang said that tourist arrivals dropped 6 percent in the first two months of 2009, but that the sector is still in better shape compared with neighbouring countries.