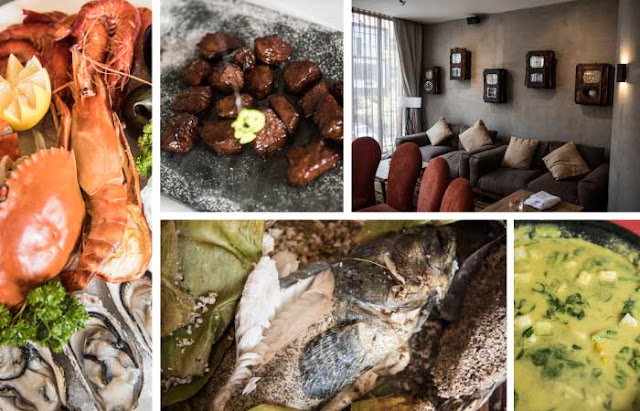 Combining some of Cambodia’s finest seafood with top treats from around the world is proving to be a winning recipe at Sevensea. Editor Marissa Carruthers and photographer Charles Fox sample the menu.

The year 2016 has been an exciting one so far for revered Cambodian chef Luu Meng, who has been busy beefing up his culinary empire. Sevensea restaurant is one of his latest ventures to land in Phnom Penh, and, specialising in a plethora of tasty seafood dishes from near and afar, already has the signs of a promising catch.

Seven is clearly the lucky number, with the menu drawing influences from seven countries – Cambodia, China, Japan, Vietnam, Thailand, Malaysia and Singapore – and the restaurant boasting seven private dining rooms, seven specialist chefs and, you guessed it, seven speciality seafood dishes for each day of the week.

Seeking to combine popular Asian cooking styles with fine seafood, the menu takes in delicious dishes from across the globe, including Boston lobster, Alaskan king crab legs and scallop, seasonal oysters, tiger prawns and tuna tartar.
The seafood platter ($80) seemed the obvious first choice, and didn’t fail to impress with a feast laid out fit for a king. A large serving plate laden with fleshy crab, freshly caught in Kampot, lobster, the fattest oysters from Hiroshima in Japan I’ve ever set my eyes on, a healthy number of plump prawns and juicy Cambodian snails took up a generous portion of our spacious round table.
And each bite was given its own distinct flavour, thanks to the accompanying four Khmer rubs and dips, which range from chilli that comes with a kick to the bitter bite of the pepper and lime concoction.

Having washed our greasy hands in a bowl of warm water left on our table. The tiger grouper with sea salt and herbs ($20 to $25 depending on size) came next, and was a feast for the eyes as well as the stomach. Served on a wooden board, finding the fish is like playing pass the parcel. First there’s the foil the large fish is baked in, then the tough, thick layer of rock salt and wrap of banana leaves, used to preserve the juices inside, then finally the fish, which is stuffed full of Cambodian herbs.

Thankfully, this task was completed by the chef, straight after he doused it in alcohol and flambéed it before our eyes, filling our nostrils with a flavoursome sweet aroma. With plenty of meat to go round, the flesh was juicy and had absorbed the mellow tones from the herbs, complementing it perfectly.
Sticking to tradition, the samplor proha ($12), or Khmer soup served with fish, snail or beef, was up next. Sevensea’s version uses local river fish, with the classic recipe of pumpkin, garlic, tamarind, lemongrass and turmeric. The result is a kaleidoscope of flavours, with each spoonful serving a barrage of bitter, sweet, sour and spicy.

Of course, diners don’t have to opt for seafood, and the menu is packed with other dishes, such as dim sum, sushi and Cambodian classics. But when the speciality is so good, why try something different?