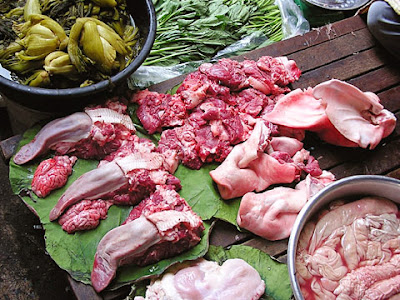 “I hope I’m not going to wake up to that tomorrow morning”,
Austin mentioned as I took the above photo.

Good morning, Austin.
I spent last weekend with Austin from RealThai while he crafts a piece for a Thai newspaper about Phnom Penh as a weekend destination, and takes photos in a manner much more professional than mine. He was keen on me showing him some of the less fluffy edges of Cambodian food (see pig parts, above, from Psar Orussei) that we could use for our own purposes. It is always a pleasure to travel about Phnom Penh with a fresh set of eyes and compare notes on respective adopted nations’ cuisines. Austin has an encyclopedic knowledge of Thai food, whereas my knowledge of Khmer cuisine is much more like an 1880’s Children’s Primer: One part shipping tables; one part unverifiable observation; three parts Tales of Interest in Foreign Lands. When Austin invited me along to provide local insights into Phnom Penh’s top end at the restaurants’ expense, how could I refuse? I consulted my shipping tables to check my availability with the tides.

Chef Luu Meng from Malis was a genuine
surprise. Since I had last eaten at Malis about six months ago, Luu Meng had tweaked the menu to add some homier Khmer food (a few basic, herb-rich soups) and altered the street-level layout to look a little classier with a paintjob, fewer tables and some deep couches.

Meng spoke at length on the primacy of freshness, the importance of the Mekong’s rise and fall to affect the seasonal growth of local herbs and the migration of Cambodian freshwater fish. He devoted twenty minutes to speaking on the flavour profile of th’noeng leaf which he describes broadly as somewhere between “green mango and tamarind”, and the huge difference between maom leaf (“Vietnamese!”) and ma-aum leaf (basil’s lovechild with spearmint). He spoke about being excited about Indian food and about weaning his staff from their previous MSG habits (none is used in his kitchen). 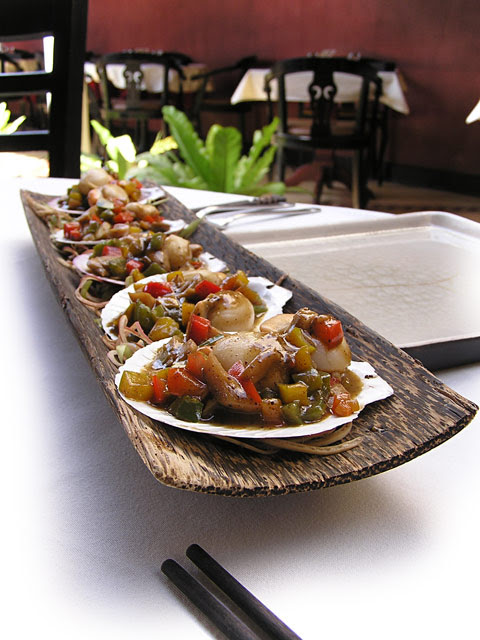 In between chatting we ate a handful of journo-friendly plates – fish amok, kroueng-coated chicken wings, local scallops with pepper (pictured above), and beef in bamboo. Most hit the more Chinese end of Khmer cuisine – Luu Meng is a man who wholeheartedly embraces the capsicum.
Night was reserved for the Khmer degustation menu at Raffles Hotel Le Royal’s fine dining effort, Restaurant Le Royal. After chatting with Luu Meng, I was openly optimistic about the direction that this New Khmer Cuisine was taking in Phnom Penh. I had also previously eaten a seriously good bowl of pho at a conference buffet at Le Royal but never set foot in their fine dining area.

Jan, our maître d’hotel/sommelier, described the menu, suggested wines, and was an altogether ideal host. European wines are not my strong point: I’ve got a decent grip on varietals but come from a background of drinking too many tannin-heavy Aussie reds, some of which from a box rather than a bottle. He made one of the best wine/food pairings that I’ve had in Cambodia. After describing Southern German terroir with glee, he picked a 2005 Wittmann Estate Riesling which was acidic but with sweetness on the back palate that fits perfectly with both the richer and subtly spicy elements of Khmer food. The nose of peaches was clear enough to bring back my grim memories of working in a central Victorian orchard, memories that in hindsight I should have appreciated as a small omen.

The trio of starters was locally inspired, only in the loosest sense. The pared-down mango salad contained chopped capsicum instead of chilli, dried shrimps mashed to a fine paste rather than whole with no real seafood punch. This was accompanied by two slices of West Coast scallops on triangle of banana leaf and a pair of wonton parcels with hoi sin sauce. I’m a fan of when chef’s pay attention to texture, which was evident, but the salad was pared back to being barely recognizable as Khmer, and the other two components could have come from literally anywhere.

I questioned our waiter in Khmer as to whether the forthcoming Pumpkin Soup was Samlor Karko, a Hindu-influenced Khmer soup which amongst other ingredients, contains pumpkin.
“No”, he answered, “It’s samlor lapov” – quite literally “Soup Pumpkin” followed by a grin.
There is a grin of nervousness in Cambodia. Ask a local about the current regime, the Khmer Rouge, or their dead parents and you’ll get the same grin. For a Westerner, there is nothing more unnerving than having a local describe their tales of torture and terror under the Khmer Rouge whilst they give you an unflinching and toothy smile. I hoped that the nervousness was more about the service staff suddenly realising that I could understand them a little when they were musing in Khmer about the sexuality of two young white men eating together by candlelight, rather than about the soup. I was tempted to confirm with them that Austin actually was my alluring Thai songsaa*.

The pureed pumpkin soup arrived topped with a square of gold leaf. It bore no resemblance to Khmer food, just as my bleak peach harvest memories bore no relationship to my continued enjoyment of the riesling. As a curious coincidence, I’d left my inamorata (who now wishes to be referred to as such in print and in person) at home defrosting herself a bowl of pumpkin soup from the freezer which she’d previously packed full of fresh Khmer ginger, lemongrass and coconut. It was the last aroma that I could smell when I left my house and now I longed for that soup rather than the one in front of me.

Between soup and mains, the Rosicrucian-ly named Executive Chef Christian Rose devoted us a half hour of his time. He spoke guardedly about Khmer food choices and regarded us with slight suspicion when we asked about sourcing local ingredients, about local Cambodian restaurants (his recommendations: Khmer Surin, Malis, beachside seafood in Sihanoukville), and about the interest of his guests in Khmer cuisine. There appeared to be very little interest despite his assurances to the contrary.
Scattered amongst the conversation, he name-dropped his upmarket ingredients and recipes: West Coast scallops; beluga caviar; Wagyu beef (“Grade 9, not Japanese but with excellent marbling”); a multiple course duck degustation; an entire constellation of foods alien to the Cambodian culinary cosmos. This was the food of international excess, high diplomacy and hardcore local corruption. Does serving this food in a starving nation make you complicit? Does eating it? The mains arrived to break our conversation before I got the chance to head it in a lachrymose direction.

The following beef loc lac hit the right note: beef (not a cut of Wagyu, which would be a foolish excess), fresh pepper from Kurata Pepper, stock reduction – completely unlike your regular loc lac which is generally made with bottled soy and tomato sauce – and so a positive top-end innovation. This was paired with a miscellaneous coconut curry with a hearty chunk of fresh bawngkang (river lobster) tail meat, a few batons of vegetable matter and a minute mound of rice. Desserts were a wide selection of Khmer sweets and I caused a small commotion when I asked the waiter to name a more obscure one (I thought num lhong, but it was revealed to be the similarly shaped num bhor por).
We rolled out of Le Royal after four hours of well-paced food conversation, great wine and barely Cambodian food.

Meals and wine at Restaurant Le Royal and Malis were provided free of charge. Malis is located on Norodom Blvd, just south of the Independence Monument. Restaurant Le Royal is located in Raffles Hotel Le Royal on the corner of St.92 and Monivong Blvd. Enter via the main foyer and turn left.
See Also: Seeing how the other half lives – Malis and Pacharan, Austin’s RealThai

* – the term “songsaa” generally gets translated from Khmer as being “sweetheart” in English, but is generally used to denote a much less benign relationship that involves the transfer of cash for services.