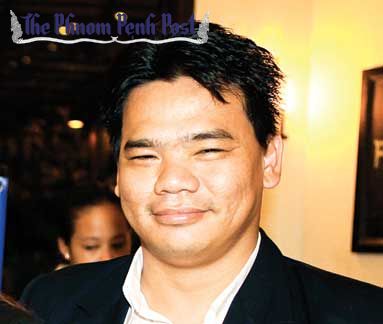 One of the consumers of insurance in Cambodia is businessman Luu Meng, owner of the Almond Hotel, the Yi Sang restaurants and other businesses around Phnom Penh.
When he started out as a chef at the Cambodiana Hotel in 1993, Meng was himself covered by insurance.
Although he never made a claim during those years, he never forgot that he was covered. Today, all his more than 200 employees are covered by insurance.
Born in 1974, Luu Meng was the eldest of three in his family and survived the Khmer Rouge period. His grandfather had been a seller of clocks and watches at the Central Market and his grandmother had operated a restaurant in Phnom Penh prior to 1974.
“During the Pol Pot time, I remember my grandfather saying, 'Stay by the water.' " So, the family survived, usually somewhere along a river.
On their return to Phnom Penh, when Luu Meng was eight years old, his parents purchased their house, near Orussey Market, with gold.
“There were no dollars at the time,” he says.
Young Luu Meng attended the Chinese Tong Hoa School.
He started at the Cambodiana in 1993 and became a sous-chef in 1995. That’s where he met his future business partner, Arnaud Darc, who was working in the Cambodiana’s finance department in purchasing.
“That’s how we started Malis. Arnaud helped me a lot,” Luu Meng says.
“When he started a small import-export business, and started the small Topaz restaurant, he asked me to create a Cambodian restaurant like Malis.
"We spent almost a year study how to do it, to make it a 100 per cent Cambodian restaurant and a signature for the nation.
“We were the management team, and we had working insurance and health insurance.”
During his training period after working at the Cambodiana, Meng worked as head chef at the Sunway Hotel, in charge of marketing and banquets.
“They sent me for training in Malaysia,” he says. It was an experience Meng never forgot. Today, he sends his own staff for training.
In 2001, Meng joined the Sofitel in Siem Reap for a year, returned to Phnom Penh, worked with the old Topaz first, then went to work on the preparation of Malis, which opened in 2005 and has since become very successful.
Meng later started the Anise Hotel, a small one with 20 rooms, made it work, then sold it to a gentleman from Mexico.
“Since day one, every property had insurance. For what I think with work and business, working hours demand, the best way to operate is to have insurance cover so you can sleep well.
"Of course you have a cost into your business, but you just make a plan and put it in your budget. Even when we started doing construction, we had insurance.
“Employees sometimes have accidents on the road, and we send those people to the clinic immediately,” Luu Meng says.
“The headache is taken care of by insurance. If you want to be successful with what you want to do, insurance must be a part of your recipe.”
Meng and his team opened the flagship Almond Hotel on the auspicious date of 8/8/08, following two years of construction. He chose the name “Almond” because “everybody loves almonds, male or female, old or young”.
Meng also opened the Filling Home Hotel, in Beung Keang Kong at the corner of Streets 63 and 278, a long stay and hotel, with Asian-style home food. “Western comfort at an Asian price,” he says.
In 2009, Meng opened the Yi Sang Chinese Restaurant at the Phnom Penh Special Economic Zone in 2009.
In 2011, he opened the Yi Sang Chinese Restaurant at Château, on the riverside, in a special agreement whereby he uses the visitors' centre to house the restaurant, and in exchange keeps clean rest rooms, free internet and even a travel agency for visitors.
“I’m happy about this project because I can contribute and at the same time do business.  We have a beautiful Phnom Penh city map, and people can enjoy the beautiful view of the river,” he said.
“You can have tourism information, buy bus tickets to other provinces, buy airline tickets. We’re open all day. People can go and search internet, read information for free, read some magazines, all the flyers from Siam Reap, Sihanoukville, Vietnam and Thailand -- really a place for international tourists to enjoy themselves and locals."
Meng’s beautiful wife Berly designed the uniforms for the Almond Hotel and Yi Sang employees and chose the materials.
The couple have a son, Han Fong, 10, and a daughter, Sao Phea, 12. Both attend the Zaman School.
As far as insurance companies, Meng and his partners work with Campu Lonpac, Forte and Asia Insurance, all three.
“We have three different companies with different partners and different relationships, and we’re happy with our insurance coverage,” he says.
“A lot of my Cambodian friends don’t know why they have to use insurance. If everybody understands insurance, I think our business in Cambodia will come up to the next level,” he said.
“We have a few employees who have accidents and you will know how important insurance when an accident has happened.
"We let our insurance officer come and talk to them. There is no hassle. We get professionals, and that is very important.”
"In one case, a staff member at Topaz had a heavy accident and broke a leg.
“We had to pay the salary of the employee, and all the medical treatment, the insurance was covered.”