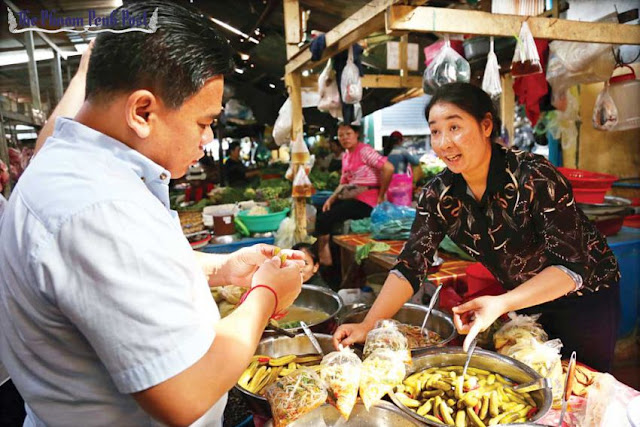 Luu Meng (left) examines a pickled cucumber at Men Thida’s pickle stall in Toul Tompoung Market this week. Hong Menea
They're kept in metal bowls, plastic buckets and in jars, and often found on the side, or even at the centre, of Khmer dishes. Sometimes they are vegetables, other times fruits, and even fish, crabs or ants.
Whether the tradition is imported or homegrown, one thing is certain: pickled foods are everywhere in Cambodia.
This was apparent on the north side of Kandal Market, where The Post recently found Pech Srey selling fresh limes and their pickled and preserved equivalent, Ngom Nov. Decidedly unappetising in appearance, and sold by her at 30,000 riel ($7.50) for a vat of 170, the brown and shrivelled limes are first dried in the sun for one to two days, before being boiled in sugar and salt water, and then further preserved in water for three to four months. They can end up in chicken or duck soup, in sauces with grilled fish, or be turned into drinks, Srey says.
And true enough, a nearby drink vendor was squeezing a pickled lime into a bag of ice, pouring in some fresh lime juice, soda water and a tablespoon or two of sugar, and for 2,000 riel, or about 50 cents, the result was a refreshing and astringent beverage.
But going from stall to stall, The Post soon found itself in a pickle trying to delve deeper into the history and place within Khmer cuisine of preserving foods in vinegar or brine. Pickles and similarly preserved foods are as integral to Khmer food as prahok, vendors said, but the back story, and the reasons for their popularity, remained unclear.
So The Post called on the expertise of Cambodian master chef and Thalias Director Luu Meng. One of the two varieties of pickled cucumbers sold by Men Thida in Toul Tompoung Market. Hong Menea
According to Meng, the local pickle paradigm has French and Chinese influences – particularly from the Teochew people who made contact with Cambodia centuries ago.
“In Guangdong, one of the areas is Teochew, and they pickle a lot of things because they are fisherman families, so when they go out they need to get their food and stock it up . . . either they put it in preserve or they do it pickled,” he says, noting that typically fish and meat would be preserved in salt.
Meng notes a difference between pa’ap or palak brai foods, which are preserved through salting or fermentation, as opposed to chhrua, or pickled food. In some cases, they are combined, for instance with turnips preserved in salt and then pickled to improve the flavour – or chrua chai tov in Khmer.
Similarly, prahok or kdam brai (salted crab) can also straddle the two techniques.
Cambodian pickling, Meng says, always starts with sugar, salt and vinegar. MSG is common in market and street pickles, and herbs and spices are added according to individual recipes.
“You need to have the balance between the caramel and lemony [flavours], and of course other seasonings,” he said.
In the spirit of showing rather than telling, Meng guided The Post through the Boeung Keng Kang and Toul Tompoung markets to meet some of the longest-running pickle vendors in town.
On the north side of BKK market at #17 Street 380 is a hole-in-the-wall shop identifiable by a glass case outside filled with fruits and marked “888” in red.
“This is the oldest pickle shop of BKK market,” Meng said, though it specialises in what he calls a “modern” pickling trend – assorted fruits pickled with chili and garlic eaten as a snack. Also for sale is cut fresh fruit, which can in turn be dipped into a pickled chili, garlic and prahok sauce. Prices are about $3 per kilo of whichever fruit one fancies, from pickled tamarind to grapes to pineapple. A variety of pickled sauces and pickled fruits can be found at ‘888’ pickle shop north of Boeung Keng Kang Market. Hong Menea
Owner Suos “Mom” Vanna says she has had her shop for 13 years and sells about 300 kilograms each day.
Meng says this kind of pickled fruit snack has been a growing trend for at least 20 years, and has especially taken off in the past decade.
“Mostly the young [and] the pregnant ladies eat these,” he says, in part because it’s considered a home-remedy to morning sickness. “They share it with people and it’s become trendier”.
For the “traditional” pickle, Meng takes The Post through the narrow pathways of Toul Tompoung Market. He’s recognised by the odd passerby, happily surprised to see the well-known entrepreneur in such a setting. At the end of the butcher’s row, Meng finds Men Thida, who has been selling pickles since she was 12 years old, before she took the business over from her mother.
Here, she sells Khmer-style pickled cucumbers. She also has a choice between pickled mangoes and half-ripe papayas, each flavoured with rice water, brown palm sugar and vinegar, with bean sprouts and lotus roots. She also has Chinese cabbage and other leafy greens, though Meng notes these are done in the Chinese style. For that, he recommends an old lady in O’Russey Market.
Luu Meng talks pickles in the market:


In Cambodian cuisine, Meng notes, pickles can serve as an appetiser, digestif or as a side dish.
“For Western people you eat your grilled pork or lamb chops with salad, we eat it with pickles,” he said, sitting down for a plate of grilled chicken and rice with a side of pickles.
They also transcend class boundaries, Thida says, with more thrifty construction or garment workers making pickles a main course with rice, while the wealthier tend to have them as a garnish.
“We eat them every day, no matter if you are rich or poor,” she says.
Source: http://www.phnompenhpost.com/post-life/pursuit-phnom-penhs-perfect-pickle