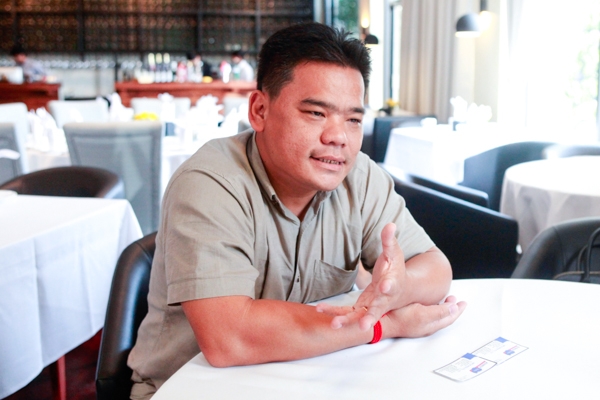 The $2 million Almond Bassac Hotel aims to accelerate the trend of promoting Khmer design and products in the hospitality industry as it positions itself to become a landmark in the capital due to carefully selected location near the banks of the Bassac River, trend-setting hotelier Luu Meng said.
With competition rising, new hotels have to be daring, Mr. Meng told Khmer Times, adding that the three-star hotel incorporates Khmer architecture as well as local products as it aims for the middle of a market he believes is expanding. Pricing and a wide range of services, as well as uniqueness, are key, he explained. The five-floor hotel, which had a soft launch last month, has 40 rooms ranging from $60 to $130 per night. The hotel also has a conference hall and VIP rooms to tap as many market segments as it can. About half of its guests so far have been from other ASEAN nations and about 20 percent have been Cambodian, Mr. Meng said.
Mr. Din Somethearith, president of Cambodia Hotel Association, said about 20 large and mid-sized hotels opened in Phnom Penh last year and that the number was higher in Siem Reap.
Mr. Meng said 30 to 50 new hotels open in Cambodia every year.
Mr. Somethearith said there were five five-star hotels in the capital, about 20 four-star hotels and hundreds of three-star hotels. “The increasing number of new hotels is a result of economic growth, ASEAN integration, political stability, improved infrastructure and a more integrated tourism plan,” Mr. Somethearith said.
Mr. Ho Vandy, advisor to Cambodia Chamber of Commerce and a president of World Express Tours and Travel, said rising domestic tourism was also fuelling demand for hotel rooms. An increasing number of families are taking weekend trips and this is creating a shortage of rooms in many popular destinations, he said.