Malis Siem Reap’s signature dish Hidden Chreav Duck. Photo supplied
“Living Cambodian cuisine” made its formal debut in Siem Reap last Friday evening with a stunning reception for 400 guests to celebrate the grand opening of Malis, the iconic restaurant that has been wowing Phnom Penh diners for 10 years.
The opening marks the end of any lingering questions about Siem Reap’s capacity to attract middle to upper middle-income travellers, as the market continues to evolve into a more complex and sophisticated destination.
Congratulating the team that made it happen, especially Arnaud Darc and chef Luu Meng, the Minister for Tourism, Dr Thong Khon, called on the hospitality industry to continue their work in making Siem Reap one of the best destinations in the world. 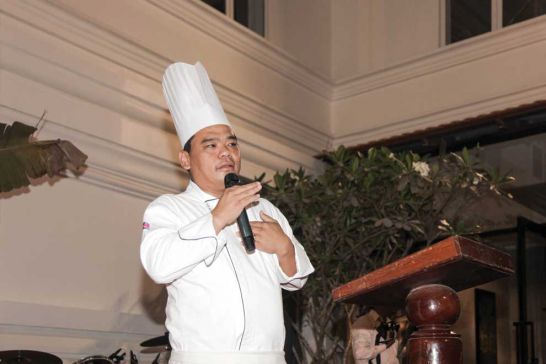 “It’s wonderful that visitors to Siem Reap, after visiting our amazing temples at Angkor Wat and learning about our unique culture, can now experience a culinary journey at Malis and taste delicious food that has been adapted from our ancestors,” he said.
The minister also acknowledged Siem Reap’s fresh global recognition as a destination worth taking note of.
“We’ve just seen Siem Reap voted Number 1 and Shinta Mani Number 2 hotel in the world on Trip Advisor. Cambodia is becoming known for its quality and sophistication,” he said.
Arnaud Darc and Luu Meng are the men whose vision led to the creation of “living Cambodian cuisine”, an idea that goes beyond the boundaries of simple geography and deeper than traditions.
Cambodian cuisine is an amalgamation of flavours, influences and techniques that is unique in the world. It is virtually a living history book, written with ingredients that cannot be found elsewhere. 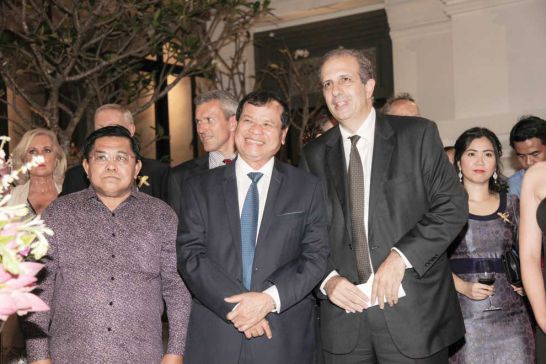 HE Bun Tharith, HE Dr Thong Khon and Arnaud Darc. Photo supplied
But their greatest problem at the outset was the lack of any clear reference. The only answer was to get out there and find out.
“I had recipes from my mother,” said Meng, addressing the crowd that included Secretary of State Kong Vibol, His Excellency Cham Prasidh, the Minister of Industry and Handicrafts, His Excellency Sum Map, Director General of the APSARA Authority, and several other dignitaries and luminaries from Phnom Penh and Siem Reap.
“But it also took a lot of talking to people,” said Meng.
“I travelled to the provinces, to markets and into family kitchens, learning about different ingredients and traditional ways of cooking.” 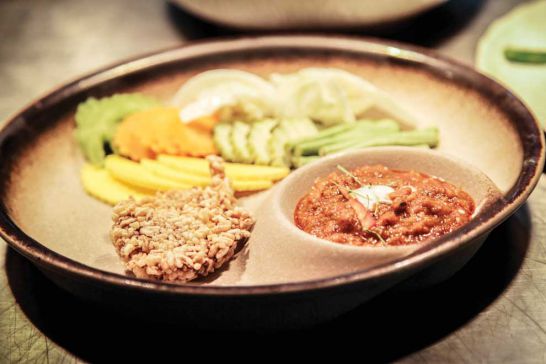 Prahok Ktis. Photo supplied
Taking his new-found knowledge back to Phnom Penh, Meng and his team set about refining and enhancing it with new techniques and modern cooking equipment.
“It is authentically Cambodian, but we also introduced some French techniques and modern equipment,” said Darc, before the evening started. “They are there in some of the ways that we cook.” But he rejected any idea that the result represents what is commonly known as “fusion” food.
It might seem that the opening of Malis in Siem Reap represents the culmination of its founders’ work in Cambodia, but it is just another stage in the process of bringing Cambodian food to the world. The team envisages a day when the Kingdom’s cuisine enjoys an equal status to other culinary traditions. Meng has already travelled extensively, frequently accompanied by Minister Dr Thong, to that very end. 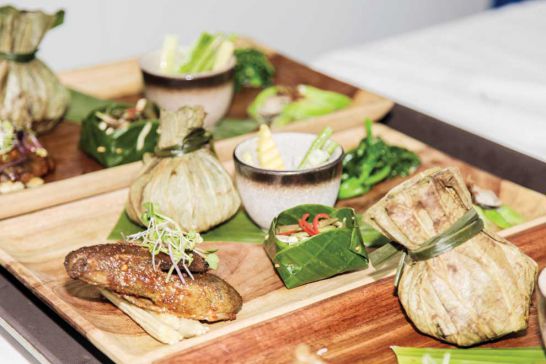 Finger food Prahok Ktis. Photo supplied
But to succeed, he will need to be followed by enough talented, trained and enthused young chefs, who will become ambassadors for prahok, kroeung and all the other delicious peculiarities that define Cambodian cuisine.
“The day will come when we have more chefs, with the skills that we need, who can go to work outside, with ingredients from Cambodia that will be exported,” said Darc.
“It will take time,” he added. “But not too much if we all work together.”
150 of the invited guests sat down to a sumptuous feast that reflected those well-balanced fruits of chef Meng’s labours. The menu included ‘prahok ktis’, which made a convert of more than a few to the fishy staple at the root of so much of Cambodian cooking, a richly flavoured beef sarawan, as well, of course, as Meng’s renowned fish amok served wrapped in banana leaf.
They were seated in the north and south wings of the 2,000 metre square building whose forthright, confident design has already made it a landmark on Siem Reap’s burgeoning riverside locale.
With 400 guests, the opening of Malis was packed. Nicky Sullivan 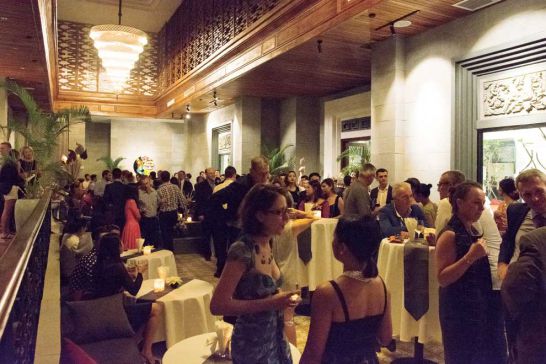 Created by Cambodian architect Vivoath Yan, the Malis building is inspired by the ancient temples of Angkor.
“My brief was to design something that was modern but also captured the essence of the past. In particular, I took inspiration from Angkor Wat and Kravan temples for the facade,” he said referencing the striking, if lesser known, 10th century temple whose modern name translates as the “Cardamom Sanctuary”.
The architect’s bold design is complemented by two 200 kilogram chandeliers in the front lobby that were designed by manager Sao Moun Daung, whose tireless efforts in the last few months ensured that the event came off without a hitch.
Underneath their glittering lights, the consensus view on the night was “wow”.