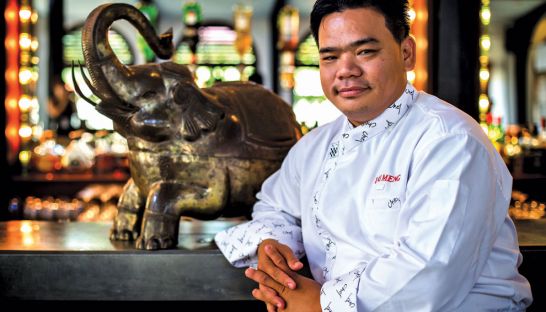 Chef Luu Meng to celebrate Cambodian rice at gala dinner. OYEN RODRIGUEZ
From hobnobbing with Brit celebrity chef Gordon Ramsay to running his own successful restaurants in Phnom Penh, it is safe to say that Luu Meng is Cambodia’s most famous chef. And now he is turning his hand to creating a five-course charity gala dinner at Heritage Suites Hotel, to raise funds for Sala Baï’s new enlarged school.
Sala Baï Hotel and Restaurant School has been training disadvantaged Cambodian youth for the hospitality industry since 2002, and has seen over 1,000 students pass through its doors and to pursue successful careers.
But Sala Baï communication manager Mayelle Barbier stresses that the hospitality market needs more staff and Sala Baï can only train 100 students a year. With a bigger school, it will be able to train 150 students annually.
“On the one hand you have a hospitality industry that needs 1000-2000 entry level staff every year, and we are only able to provide 100,” she says. “And on the other hand we also have around 500 applicants each year, and so we know that every year there are 400 who are not able to join, which is very frustrating.”
Barbier says that when her staff interviews the applicants, most say they will seek work in Thailand if they are not selected as there are no other opportunities here.
“It’s very hard to hear that when you know that you are able to do something,” she says, “not for all of them, but our aim is to be able to welcome 150 students by 2017.”
The extra room in the new building will also allow Sala Baï to branch out into spa and beauty therapy training next year.
“We already purchased the land. There is one property on it which will be the hotel, but we still have to build the restaurant, the school and the office,” says Barbier. “The aim is to open the new school in 2015, and gradually increase the number of students.”
The gala dinner, to be held poolside at Heritage Suites on March 21, costs $75 per person and will feature a menu by Luu Meng which “highlights Cambodia’s acclaimed Best World Rice campaign” – Cambodia has won the accolade of World’s Best Rice two years running. 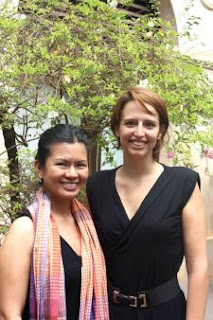 Heritage director of sales and marketing Jam Nsouli with Sala Baï communication manager Mayelle Barbier. MIRANDA GLASSER Miranda Glasser
“We wanted to showcase the Cambodian culinary art, and Luu Meng is also dedicated to helping the younger generation,” says Heritage director of sales and marketing Jam Nsouli. “When we asked him he said yes at once.”
Nsouli says the menu includes fine wines and is a fusion of Khmer and Western.
“We are deriving the menu from the Best World Rice campaign, and revising it a little to accommodate and cater for the Western palate.”
The feast includes dishes such as crabmeat salad with prawn and red jasmine rice cracker, river king lobster with broken white jasmine rice and green mango, and Australian veal tenderloin seared with coconut, rice and herbs.
There will also be an auction and live music.
“We have some unique auction prizes,” Nsouli says. “We’ve confirmed two nights at Knai Bang Chatt in Kep, and a Relais & Chateaux restaurant in Singapore is offering dinner for two.
“We’ve got some unique pieces of art, one from Eric Stocker who does lacquer paintings, and one from a very famous Swedish sculptor who is actually the father of our general manager Magnus.”