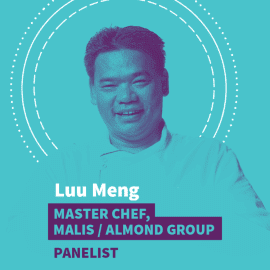 Equipped with knowledge of Cambodia’s traditional use of flavors and spices that he learned from his mother, Luu Meng was inspired to pursue his passion for cooking abroad. In his cooking career, Luu Meng had worked with, chef, author and television personality Anthony Bourdaine and participated in an episode of the Gordon Ramsay’s television program, Great Escape.

Luu Meng has been recognised both as a Master Chef as well as an entrepreneur. He is the Chef, Entrepreneur and Partner of THALIAS and the owner and CEO of Almond Group and WORLD DINING.  Today Luu Meng is widely regarded as Cambodia’s greatest chef, the country’s first internationally recognized celebrity  chef and a living national treasure.

Breakout Session: Hospitality, Food and Beverage
3:05pm - 4:05pm Feb 15
The hospitality industry plays a vital role in the Kingdom and is about to take off. How can this industry further connect with global trends while ensuring that local produce play a key role while international demand on highest levels is met?