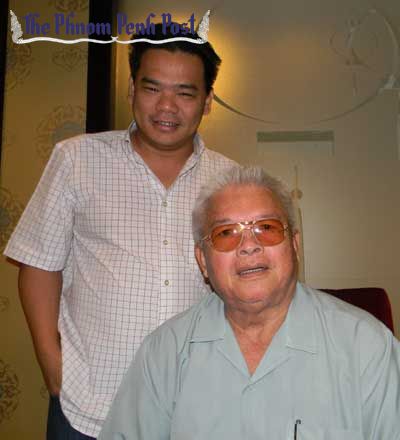 When young Hak Srun arrived in Cambodia in 1947, he was a little boy of 10 years old, from Guangdong province in China. Stuart Alan Becker/Phnom Penh Post
Hak Srun, 75 with Almond Hotel owner Luu Meng yesterday morning.
His father had come to Cambodia first in 1936, looking for a safe place where his family could live as the forces of Imperial Japan rampaged across China.
Today, Hak Srun is 75 years old and has six children, one of whom lives in the United States. He has 14 grandchildren and one great grandson.
Hak Srun took time yesterday morning at Luu Meng’s Yi Sang restaurant at the Almond Hotel to recount the main events of his life and the happiness his family brings on the eve of Chinese New Year.
From 1947 to 1954, Hak Srun said, life started getting better as King Sihanouk began making moves toward Cambodia’s independence from France.
The family lived on a vegetable farm in Phnom Penh, where the Russian Hospital is located today.
Hak Srun was married in 1958 and moved away from his parents to Kampong Cham, where he started a small shop with a trading business and a prawn farm.
Life started to get difficult between 1970 and 1975, he said, with inconsistent business and less safety, having to move around. By 1975, the whole of Phnom Penh had been evacuated and Hak Srun and his family lived in Kampong Cham.
He moved around to survive with his family, using a motorbike for transportation, with his kids riding along with him. Hak Srun says he survived the Khmer Rouge period because he was working hard growing vegetables and everybody needed to eat.
Hak Srun remembers watching a seven-day non-stop aerial bombardment of the army base across the river from him.
“We could see the bombing every day,” he said.
Hak Srun said when the Vietnamese Army arrived in 1979, nobody knew what was going on.
“Nobody knew who was who.”
How does Hak Srun feel now after all the tumultuous events of his life?
“The country is like a family,” Hak Srun said. “When you have nothing, you build. I can see improvements every year.  It used to take 12 hours to travel to Kampong Cham. Now it only takes two hours.”
Hak Srun still has a house in Kampong Cham, where he goes often to stay with his children and grandchildren.
He’s proud of his son Ung Ly Heng who runs a successful business called Foton, which imports Forland trucks from China.
As for Chinese New Year, 25 of Hak Srun’s family members, relatives, children and grandchildren will all join him Sunday night for the New Year’s Eve celebration.
“I feel great about life,” he said.
“What’s important now are the children having prosperity and I’m so happy to see that. I’m very comfortable as a Cambodian, but in my cultural roots, by food and tradition, I am Chinese.”