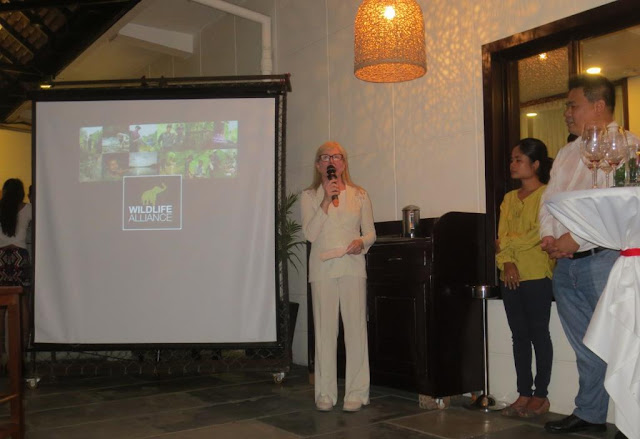 Campaign launch: Eat Khmer Flavor, Not Khmer Wildlife
On Friday 6 October, Uy Kuyteav Restaurant BKK hosts an evening of art and cuisine to launch a campaign about the impact of wildlife consumption.

A new campaign Eat Khmer Flavor, Not Khmer Wildlife aims to raise public awareness of a critical threat facing Cambodia’s wildlife: snaring. Animals unlucky enough to be caught are sold for their supposedly medicinal parts or served up for dinner.

“Snares are laid for a handful of valuable species but are hazardous to any animal that passes by,” says Vanessa Herranz Muñoz, leader of the Kla Trey | Cambodian Fishing Cat Project which is organizing the campaign alongside NGO Wildlife Alliance.
The event at the newly-opened BKK branch of restaurant Uy Kuyteav, marks the launch of the campaign. “We hope to start the conversation about the insidious impact of snaring by bringing together artists, conservationists and foodies in celebration of Cambodia’s wildlife,” says Herranz Muñoz.

Cambodian celebrity chef and Uy Kuyteav owner Mr. Luu Meng has been behind the campaign since its conception: “Wild meat is nothing special, has no powers and can even be dangerous for health,” Luu says. “Khmer cuisine is full of amazing flavors, there is no need to add anything “exotic” to it.” The restaurant’s menu showcases authentic dishes from around the country driven by the master chef’s signature innovation: “We’re continually searching for new ingredients, especially herbs- in Cambodia we have over 400 types of herbs.” Incorporation of the country’s distinctive and diverse botanicals moved Luu to recently re-brand Uy Kuyteav as “Cambodian herbs cuisine.”

The event will feature the Capture Project, a photo exhibition created by a coalition of artists with the support of Wildlife Alliance amongst others. Cambodian models, including Sothy Sith and Peter Phoeng, appear in photos with simulated injuries inspired by those of snared animals found in forests with which they are juxtaposed.
The focus of the exhibition, which debuted in Aeon Mall in August is “to show to Cambodian people the consequences of eating wildlife meat,” said Dou Pothlimata, aka Apple Love, the project’s principal artist. “People are not aware that so many animals die or are injured from snares set in our forests.”
Renowned artist Chhan Dina will also exhibit her nature-inspired work, with Water Buffalo, Sarus Crane, and Wild Jungle Fowl just some of the species to grace her canvas. “People probably recognise my art by the birds!” Dina says. “My message is please preserve animals, don’t kill them because now they are less and less.” Her exhibition will run at the venue for two weeks starting from Friday 29 September, with some of the proceeds going to the campaign.

Wildlife photographer Senglim Suy will debut his short documentary, “The Unforgettable Wilderness of Cambodia” which offers rare glimpses of the country’s diminishing natural heritage. Better known as the founder of organisation Birds of Cambodia Education and Conservation, Suy went to great lengths to immortalise some dazzling species, from scaling trees on Bokor Mountain to film majestic hornbills and nursing gibbons, to braving harsh monsoon conditions in the depths of Preah Vihear.
The Kla Trey | Cambodian Fishing Cat Project will unveil the latest footage from their camera-traps, in addition to a short documentary which takes the viewer on the trail of the fishing cat along with the Kla Trey team deep in the mangroves of Koh Kong province.

Also making an appearance will be an epic elephant sculpture made of 10 different types of snares inspired by real-life success story Chhouk, a baby elephant found wondering alone in the forest with three feet- he lost the forth to a snare. Chhouk was rescued by Wildlife Alliance in partnership with the Forestry Administration and now lives at Phnom Tamao Wildlife Rescue Centre with the help of his custom-made prosthetic foot.

Entry to the event is free and attendees can enjoy complimentary canapés and wine whilst taking in exhibitions and short presentations throughout the evening. An optional special buffet for $15 will be served from 7pm following the official launch of the Eat Khmer Flavor, Not Khmer Wildlife supported by Mr Luu Meng.