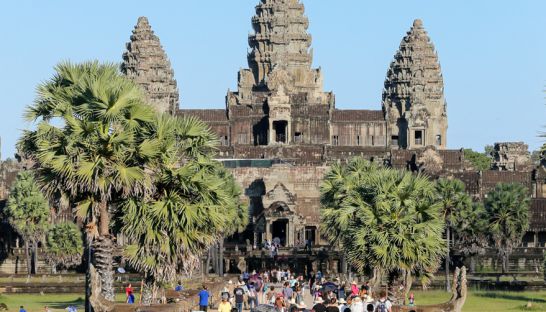 Angkor Wat ticket sales revenue surged during the first half of 2017 on the back of a sharp increase in tourist entry fees, with no indication that the steeper admission prices had discouraged visits to the Kingdom’s top tourist draw, government officials said yesterday.

Ticket sales for Angkor Wat Archaeological Park generated $52.2 million during the first six months of the year, compared to $31 million during the first half of 2016, according to data released by Angkor Enterprise, the agency that manages ticketing for the historic temple complex near Siem Reap. The data showed a total of 1.2 million foreign tourists visited the site between January and June, about 13 percent more than during the same six-month period in 2016.


Chao Sun Kerya, a spokesperson for the Apsara Authority, which manages the country’s antiquities sites including Angkor Wat, said the increases in both revenue and admissions during the first half of the year were proof that the revised ticket prices that came into effect on February 1 did not discourage tourists from visiting the temple complex.

“There was a huge rise in revenue and the number of visitors also increased, so there is no sign of any negative impact [from the higher entry prices], at least not yet,” she said, adding that it would be difficult to draw any firm conclusions until the results of the second half of the year were in.

Luu Meng, co-chair of the Government-Private Sector Working Group on Tourism, who previously expressed concern that the higher ticket fees could discourage tourists from visiting Angkor Wat, said the latest figures were reassuring.
“We’re still seeing an increase in the number of visitors, which is good and makes us less worried,” he said.